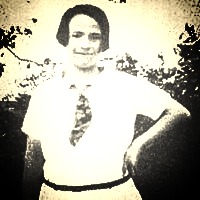 Who Was Ella May Wiggins

Ella May was born in the heart of the rural Smokey Mountains in Sevierville, Tennessee on September 17, 1900.  Her parents, James and Katherine May were subsistent farmers.  Everyone in the family had to work on the farm in order for the family to survive.  The family harvested corn, yams, cabbage, beans, and apples.  Ella’s father would sometimes go hunting and catch rabbits and opossums.  Despite the hard work and the meager existence there was pride found in mountain folk such as the May clan.  Those living in isolation in the mountains, descendants of such pioneers as Davy Crockett, had an independent resilient spirit.

Generations of traditional simple unchanged mountain living ended for thousands in a matter of a few decades.  In the late 1800’s the railroad industry started cutting through the Smokey Mountains, soon followed by the timber industry.  In 1910 pulled by the hope of a more prosperous future the May family joined the booming logging industry.  Countless families like the Mays left their small family farms in preference for cash wages.  Settlers that had lived in harmony with the land for over a century now became roaming nomads, agents of deforestation.  The pristine natural beauty of the Smokey Mountains was lost.  Trees were not replanted resulting in vast tracks of devastated mountain land.  The logging industry’s causalities were not only trees.  Logging was dangerous work.  It crippled and killed many men.  Ella’s own father misjudged the direction of a log’s fall while cutting and was killed.

While Ella’s father was still alive young Ella and the other women in her family took in laundry from other working men.  Ella also sang songs to the men at night after they returned from work.  Ella was a very talented singer and well-liked.  One man who was especially taken by a then seventeen-year-old Ella was John Wiggins, a logger who was seven years older than she.  Soon after meeting the two were married and a year later at the age of eighteen Ella’s first child Myrtle was born.

In the 1920’s Ella and her ever-growing family left the logging industry.  The need for loggers was dwindling.  Some families went to work in the coal mines and others like Ella’s went to work in textile mills.  Ella’s family chose to work in the textile mills because unlike the mines the mills hired women.  This was vital to Ella because her husband John had just been injured in a logging accident.  Due to her husband’s injury he had a hard time finding work.  He compounded the problem by becoming an alcoholic.  He eventually left the family, but continued to visit from time to time.

Ella worked at a plantation picking cotton to support her family before she moved to the mills.  In Spartanburg, SC Ella gave birth to her third child Millie, who was named after the plantation owner Miss Millie Littlejohn.  After leaving the plantation Ella and her children moved to many different mill communities.  She worked in mills in Spartanburg, Cowpens, Lowell, Gastonia, and finally settled down in Bessemer City, NC.

Ella May had developed a skilled profession as a spinner.  However she found it difficult to feed, clothe, or provide medicine for her family properly no matter where she traveled.  She would leave unsatisfactory pay and conditions at one mill to find more of the same at another.  Four of Ella’s children died in early childhood.  One of the diseases her children died from was Pellagra caused by a deficiency of niacin, easily remedied by a healthy diet.  By 1929 Ella was living in Bessemer City with her five surviving children.  This is the time and place where Ella became involved with a union.

The National Textile Workers Union (NTWU) promised the workers better pay as well as better working and living conditions if they stuck together and joined the NTWU.  Ella was one of the first to sign up.  She became the secretary for the Bessemer City branch.  She wrote and sang songs to encourage other workers to unite.  “Mill Mother’s Lament” became her most popular song.

Ella and many other workers hoped with all their heart that the NTWU would make things better for them and their children.  The problem was that the mill owners were no longer seeing the massive profits that many of them once enjoyed.  In 1929 the textile industry was experiencing a depression that preceded the nation’s Great Depression.

This fact coupled with deep seeded hatred of Northern interference found in the Northern led NTWU made for tense dangerous times.  The South had suffered at the hands of the North during the Civil War.  The economy had been decimated.  The New South proudly reinvented itself upon the success of the textile industry.  Community members were proud of the textile mills, the work and the money they provided.  Many people became enraged that a union from the North that did not understand Southern culture was trying to tell Southern textile mills what to do, even more perhaps endangering their very existence.

The NTWU was Communist led.  To local and national union leaders this meant the union wanted fair pay and good working conditions, equality for all workers, and workers to have a say in their working environment.  To those at the highest command in the Soviet Union the long term goal was eventual national party takeover.  However those NTWU organizers on United States’ soil were focused on immediately improving the lives of the workers they organized.

The Southern community became further agitated when it discovered that the NTWU was not only trying to organize white workers, but black workers too.  The South was still segregated at this time in history and most Southern whites did not like the idea of blacks and whites working, socializing, nor organizing together.

Ella May was not typical.  She worked alongside blacks in a mill and lived in a black mill village.  Ella was a feisty woman and did not care what others thought.  She was friends with her black neighbors and they helped her family out.  Ella’s black neighbors identified with her plight with poverty, for they suffered as she did.  They were her friends and respected her independent nature.  Ella was the only member of the union that could get black workers to join.  Ella was despised within much of the white community because of this.

On September 14, 1929 Ella with other strikers was traveling from Bessemer City to a union meeting in Gastonia aboard the back of a pickup truck.  As they neared their destination they met a group of men in cars that were blockading the road, which forced the truck to turn around.  The cars in the blockade followed the truck.  One pulled in front of the truck forcing it to stop.  Soon after, a handful of men stood out in the road with guns raised.  One man pointed a gun at Ella May and fired.  Ella May yelled, “Lord a’mercy they’ve gone and shot me.”  Ella May was shot through the heart and died within moments.

“We leave our homes in the morning,
We kiss our children goodbye,
While we slave for the bosses,
Our children scream and cry.

And on that very evening,
Our little son will say,
“I need some shoes dear Mother,
And so does sister May”.

How it grieves the heart of a mother,
You everyone must know,
But we can’t buy for our children,
Our wages are too low.

It is for our little children,
That seem to us so dear,
But for us nor them, dear workers,
The bosses do not care.

But understand, all workers,
Our union they do fear,
Let’s stand together, workers,
And have a union here.